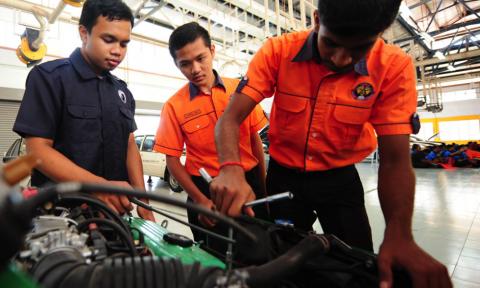 A commission overseeing all Technical and Vocational Education and Training (TVET) institutes could soon become a reality, thanks to an upcoming private member’s bill by Permatang Pauh MP Nurul Izzah Anwar.

But how will the body – dubbed the Industry Skills Education and Training (ISET) Commission – impact youths who are studying or will study at TVET institutes?

Asked about this in an interview at Parliament on Monday, Nurul Izzah told Malaysiakini that one improvement she hoped to see was for TVET graduates to get adequate wages.

This will be a trickle-down effect stemming from the overall improvement of the TVET programme.

The TVET empowerment committee chairperson said the ISET Commission will, among others, facilitate data sharing between all TVET institutes, many of whom are currently operating in silos.

This will in turn facilitate better matching between TVET programmes and industry needs, for example.

“If there’s a wonderful report by Mida (Malaysian Investment Development Authority), I’d like to access it so all the TVET institutes can fully utilise it.

“For example, perhaps there’s a plateau in the hospitality field, we don’t have enough hotels for all the graduates (to work in).

“So you can shift into medicine, or telemedicine. Geriatric specialists are especially in need because we have an aging population so maybe the institutes can train them as nurses instead,” she said.

The ISET Commission, she said, will also ensure better job security for TVET graduates and avoid repeats of past situations, such as students from government-run institutes being unable to find employment due to their certificates not being recognised by the Public Service Department (PSD).

She said the ISET Commission will also work with the Malaysian Qualifications Agency to develop ways to convert TVET programmes into credit hours so graduates can further their studies.

Nurul Izzah also aims to make the ratings of the different TVET institutes public, so that parents and youths can assess which schools are best for them.

“You want to change lives, by having reputable programmes that can allow them to have a better degree of social mobility, and so they can get better pay. This is what we’re about,” she said.

One example that shows how successful TVET can be is Politeknik Mersing’s cybersecurity programme, which the PKR vice-president is especially proud of.

“In Mersing, they have cybersecurity experts that will automatically get a job in Singapore (upon graduation).

“Will I ever look down on cybersecurity graduates in Mersing? Never! Because they know their stuff.

“That’s how you change perception (of TVET). You get meaningful wages through programmes that the industry recognises. It’s a no-brainer,” she said.

She stressed that TVET can also help revolutionise other sectors, including agriculture and even traditional sectors in rural areas.

“How about the Orang Asli children in rural areas? They also want jobs, they want opportunities to live in their villages but yet have a meaningful wage.

“So it’s not just about the fourth industrial revolution, but how the Internet helps them achieve their outcome for their traditional sectors,” she said.All this requires strong political will to see changes through, she said.

For example, the government and under-performing TVET institutes must “bite the bullet” and make improvements.

Institutes that don’t improve or don’t fulfill conditions required by the commission will run the risk of being shut down.

Once tabled, it will be up to either the Education or Human Resources Ministries to adopt the bill so that it can be debated in the Dewan Rakyat.